Here in Oak Harbor, we have a happy little trend going on that promotes joy! It’s Whidbey Island Rocks!

But, this trend didn’t start here; as a matter of fact, painting rocks goes way back in history! They were used to tell stories in some cultures, as trading pieces in other cultures….But, rock painting has been a dormant art form until fairly recently. As far as I can determine the rebirth of rock painting, here in the Pacific Northwest,  began in Port Angeles and has been spreading! There are Port Ludlow Rocks, Bremerton Rocks, Vancouver WA Rocks and Jefferson City Rocks.  I also recently discovered that the same things has begun trending in Virginia Beach on the east coast, as well!

That’s not to say that is all there is. My lame search only turned up these areas but I’ll bet there are plenty of towns doing this! I hope that this post encourages more people in many other towns to take on this endeavor and make it a joyful trend in their areas!

So, what’s the big deal?

First, rocks are everywhere, but the prospective artist needs to find well-worn, rounded rocks like those from rivers, lakes or the seashore. They are a cheap medium to work with and anyone can do this! Be sure not to take rocks from State or Federal lands; that is against the law.

Second, they are fun to hide. Just be sure to find out where you can and cannot hide them. Some businesses and even schools don’t want them hidden on their property. You don’t have to be super clever at hiding either.

Third, they are a joy to find! Potentially, each artist conveys some positive thing on their rock; be it a beautiful design, an inspiring saying, some trendy icon (Ghostbusters, Pokémon, Star Trek, Pop Stars symbols…) or some positive affirmation. Regardless of what is on them, they bring the discoverer a moment of joy!

Be sure your painted treasure conveys positivity!

We NEED MORE positive things in our lives with so much negative garbage being broadcast over the media pipelines.

Some people put a little tag on the back that directs the discoverer to either re-hide it or keep it for their own painted rock garden. Other rocks don’t have anything on the back or bottom like that. But the main thing is that when you find a painted rock, photograph it and post it on Face Book, and then do what you choose to do with the rock, afterward. Chances are there is a special Face Book page just for posting found rocks!  There are some amazing artisans there!

The bottom line is to have fun with them and spread happiness if you decide to become a rock painting artist. Let it be YOURS and don’t worry about others’ designs. Each and every rock that is painted and hidden is valid and brings joy. I know I can’t draw wonderful 3-D designs but I’ve got other clever ideas. Open your mind and let the ideas flow!

To date, I have found just two, as seen in these images below.

Who ya gonna call? My first find, discovered near a grocery store in our town. 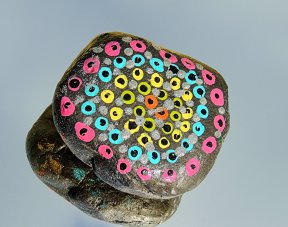 My husband was the first to spot this one in the crotch of a tree by the doctor’s office.

I’ll be sure to update this post as more rocks are found. I don’t necessarily go out to find them; I just happen to spot them when I am out and about doing errands.

I’ve got the rock painting bug, so I’ve gone out and found a bunch of beauties on my favorite beach, down the road! Several projects are under way! I figure if I’m going to write about it, I may as well be doing it, too! That way, I can substantiate my claim! 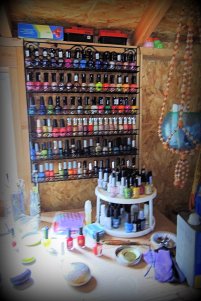 One wall rack of nail enamel….

The other rack of nail enamel…

Need plenty of light to work!

There are several little projects here…

I’ll be sure to spread happiness, love and joy when I hide my rocks.

Let’s make this trend go viral and global! Let’s all get involved!