He appeared on the grill on the balcony of the resort room we were staying in, in Seaside, Oregon.

He was very clean and nicely marked, boldly regarding me with his eyes. I spoke to him and he didn’t flinch! I went in, grabbed my camera and started taking photos of him and STILL he didn’t seem to care. In fact, he hopped from the grill and was standing on the corner railing! He is a seagull and I named him Jon Gull. 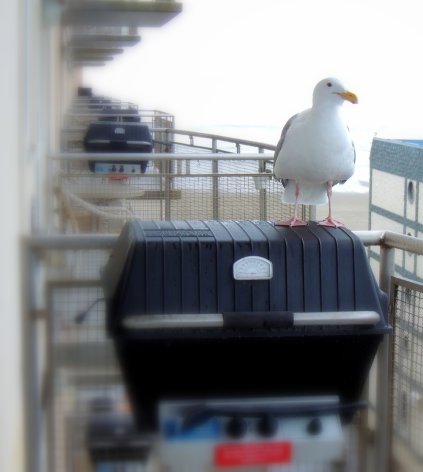 Look who came to visit! 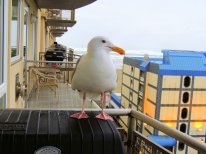 I can almost touch him! 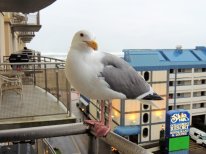 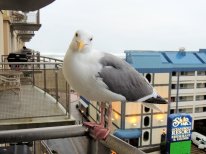 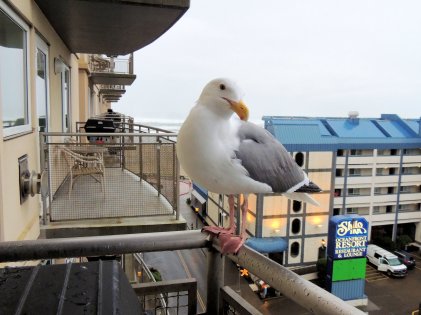 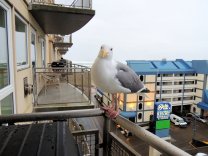 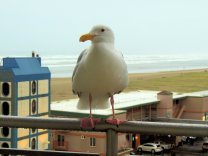 Making way toward the door…

I can’t name him Jonathon because that name has already been used in a novel by Richard Bach called “Jonathon Livingston Seagull!” For all I know the name is probably also trademarked, so I named this bird simply Jon Gull. He didn’t beg but seemed simply curious of me which made me curious about HIM.

This is Jon Gull. 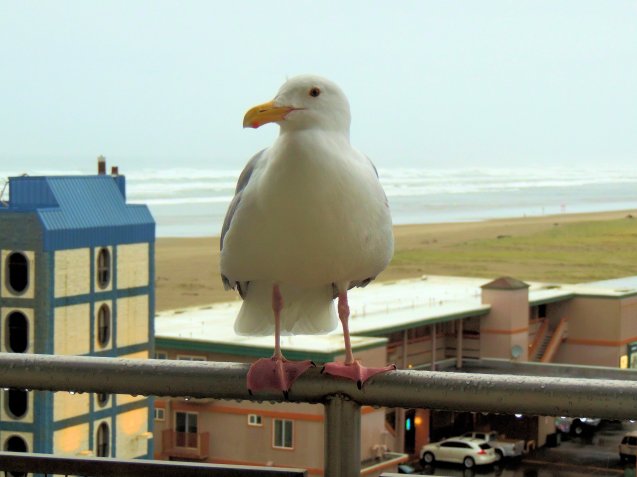 This guy visited our resort room balcony twice! Once in the morning and again, another day in the evening!

I did write that he is nicely marked. Well, he is. Since he is studying me, I figured I can study him, too, so I did. I noticed the orange circle on his pristinely yellow beak, just near but not ON the tip of his beak. His white feathers were cleanly white; almost TOO white! The grey feathers were just ~ so. His feet were also surprisingly clean…..and pink with subtle black running along the feet bones. All I could think of was what a nice, clean bird he was for a scavenger bird!

I would go inside to let him leave but all he would do was move closer to the door of our room by sliding sideways along the balcony railing. I took photos of him also from inside. 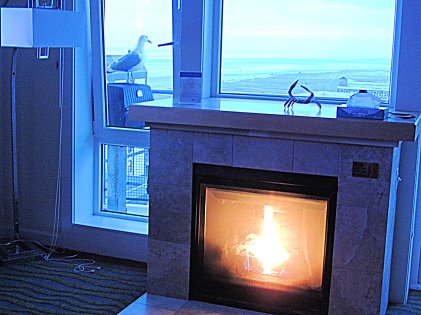 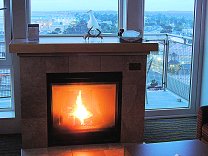 …but then, he moved along the railing…. 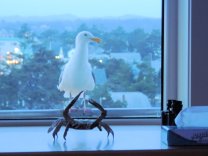 Thought this was a funny image!

He wouldn’t leave!  After some time, I tried to ‘shoo’ him away and he flew off – for a very brief time – then returned right back to the railing directly across from the door to our room. It was beginning to feel spooky! My husband suggested I toss a fried chicken wing tip from leftover dinner out toward a parking lot across the street. We typically don’t do things like that since it only serves to encourage more seagulls hanging around, but this bird would not go! So, I tossed the wing tip….and he did leave.

A couple of days later, in the evening, he returned very much the same way as before; by standing on the grill and looking into our room.

The sun had set and it was getting dark. Don’t these birds go roost somewhere for the night? Again, I grabbed my camera and took more images of him. What else could I do?

Eventually, we drew the window blinds to retire for the night and he did leave. He did not return after that, but I had to write about him.