Paella is a delightful Saffron infused dish that originates from Spain. There, entire families will participate to make this dish, typically over an open flame. It is basically a rice dish with different meats like sausage, chicken and/or seafood. I’m particular to having seafood in my Paella.

It is nice to have an actual Paella pan. I have a 14 inch one, but a large skillet will work, too. 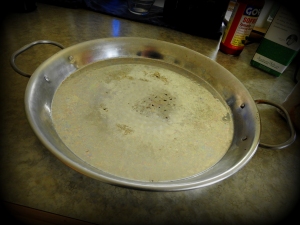 I make it once in a great while because it does involve some task intensiveness to make solo. I like to make this dish for special occasions like birthdays  or a an a-typical dish for holidays. Recently, I made it for Easter in lieu of the traditional Ham or Turkey dinner.

The first thing I do is make an aioli and cut up some lemon wedges to have ready for serving.

To make the aioli, you will need a few cloves of garlic, chopped or minced, a pinch or two of salt, some olive oil and lemon juice for flavor.

Put the chopped garlic and salt in a mini food processor and pulse until the mixture is very fine. Then, drizzle just enough olive oil in to make a thick mayonnaise-like consistency. Mix in lemon juice to taste. Refrigerate until serving time.

This mixture has crab, shrimp and calamari.

I found some snow crab legs and added them in. 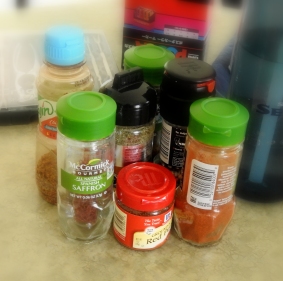 For the Paella, you will need the following:

1/3 lb shrimp, peeled (reserve the shells for making the broth)

A pinch of Saffron threads 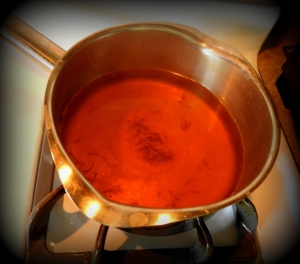 Sofrito in the making….

Serve on individual plates OR let your guests eat directly from the pan or skillet, working from the perimeter of the Paella, toward the center. Don’t forget the aioli or lemon wedges!

His mom, kind of.