When you hear the town’s name, Fort Bragg, what kinds of images does the name conjure up in your head? Do you get the image of a military town? Perhaps, mostly Army? In a sense, it was.  Before the Civil War, in 1857, the Bureau of Indian Affairs established a garrison post for the purpose of maintaining order on the Mendocino Indian Reservation.  It was named after its first Commanding Officer, Captain Braxton Bragg. Later, in 1866, the garrison was discontinued and the surrounding lands were opened for settlement.  Ranches sprung up all around and the old garrison post became a lumber town.  On the northern part of town, the Noyo River meets the pacific and a harbor was built to accommodate lumber trade.  As the lumber trade faded in the area, commercial fishing grew and the Noyo Harbor still remains a commercial fishing port.

Points of interest include Noyo Harbor, The Skunk Train, a variety of art galleries, a historical museum, Glass Beach (it was once a place where the towns folk used to dump their household garbage over the cliffs and in an effort to clean up the area, fires were built to burn the trash down and what remained was large mounds of glass), and Point Cabrillo.

Over the bridge and through to Fort Bragg….

It was raining the day I took these images….

The Emerald Dolpin is where I stayed. 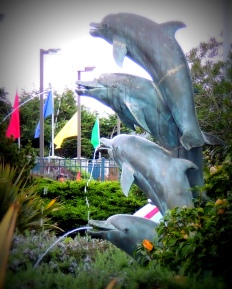 I love dolpins! Had to play with this fountain.

Miniature Golf in the rain?

A really cool Victorian home near where I was staying…..

Despite the rain, I just had to capture this home…. 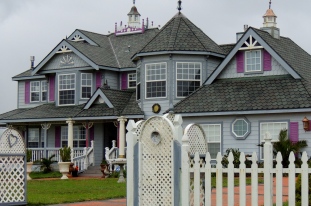 I hope the owners don’t mind….

Two Skunk Trains run; one out of Fort Bragg and another out of Willitz.

Glass Fire Gallery was one place I visited…..

It is all about the jellies! 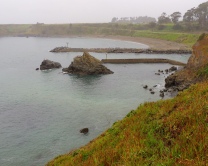 I’m getting caught in a downpour! 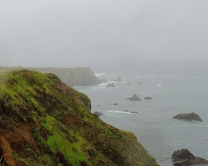 Here it comes in force! Time to bail and run home! 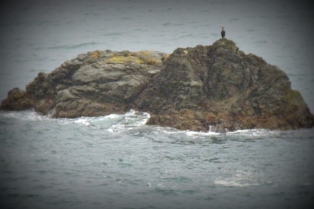 Even the birds are hunkering down.

Going fishing in the rain!

The cliffs of Noyo Harbor are a great place to whale watch! A passing grey whale….

2 thoughts on “Staying In Fort Bragg”