The word “lucky” can mean many different things to different folks!

For one person, it could be a rabbit’s foot, while another perceives the horse shoe as lucky.  Conversely, many folks believe that the number 13 is unlucky.  What does it all boil down to?  Perception, plain and simple.

Having put that out there, my perception of lucky is more pragmatic. To me, lucky relates to things that have survived time.  There are so many factors that can influence how someone or something survives the test of time!

I have a curio cabinet that was created in 1900.  It was a true barn find that survived mold and mildew, fire and ice and just plain neglect by being hidden under some old tarps. THAT to me is lucky!

There is the Japanese glass float ball that survived the seas for years, making its slow way over to our beaches. Storms, vessels, animals and tides were its main challenges, but it was lucky and it arrived safely in Ocean Shores, WA.

There is my first toy as a baby: a stuffed Steiff fish named “Flossy.” Any one of us knows that child’s toys are subject to a real test of time simply because of the journey they take with a child through the years! Amazingly, this fish survived teething, temper tantrums, loss during moves and transfers in the Navy. It is still with me in pretty darned good shape! 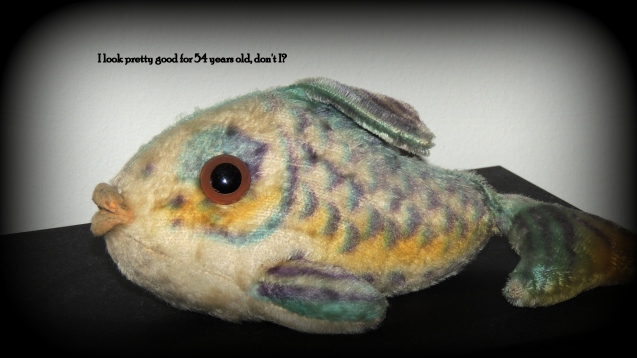 The caption inset was written two years ago. She’s now 56.

Finally, another little treasure of mine is an original Lava Lamp that was given to my the Christmas of 1975 by an old boyfriend I dated in high school. The original box didn’t survive but this lamp has a glass top filled with a special oil and wax! It still works! With all of the moves while serving in the Navy, it is LUCKY is wasn’t broken or stolen!